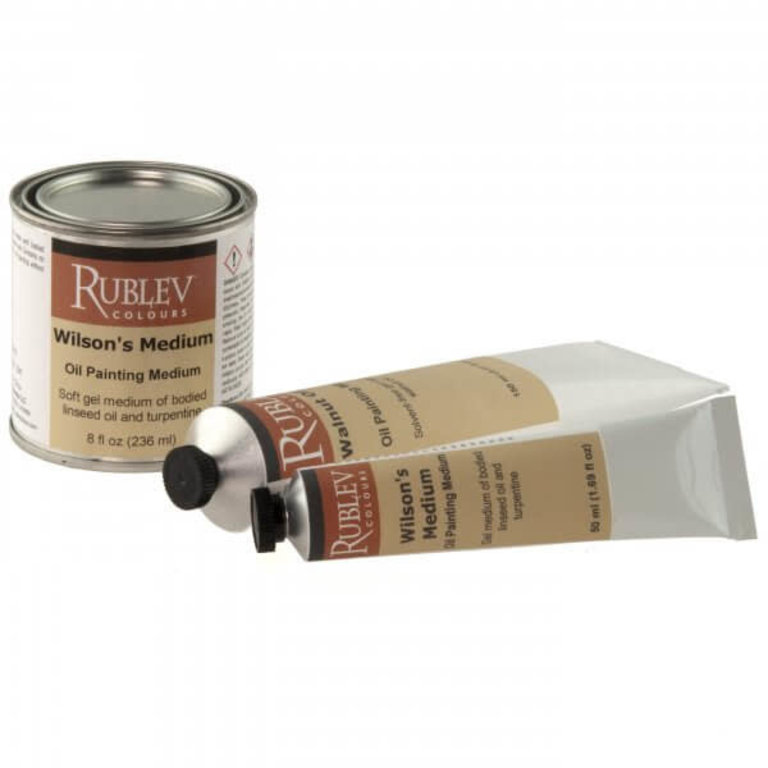 C$33.50
Rublev
2 In stock
Wilson's Medium is based on the 18th century medium developed by Richard Wilson, British landscape painter and, according to Field, also used by Joshua Reynolds. No driers or resins added.
Share this product:

Wilson's Medium is a clear, gel-like oil based on the 18th century oil painting medium of thickened linseed oil, turpentine and beeswax used by the English landscape painter, Richard Wilson (1 August 1714–15 May 1782), who may fairly claim the honor of being 'the father of British landscape painting,' and, according to George Field, also used by Joshua Reynolds. We've taken the original formula and improved upon it by using the palest bodied linseed oil, pure distilled gum spirits of turpentine and rheological castor wax instead of beeswax.

Castor wax is obtained by the controlled hydrogenation of natural castor oil. When molten it is clear, transparent and largely colorless. Castor wax is practically odorless and has the same toxicity as linseed oil or other vegetable oils. Castor wax is extremely hard in comparison with most other waxes, so it can be used in much smaller amounts than beeswax to provide the same properties.

No driers or resins are added to Wilson's Medium, so it can be safely added to oil paints. Mix it directly with colors to give oil paint a buttery consistency that holds brushstrokes yet dries to satin finish.

Use to Make Oil Paint.

Add Wilson's Medium to pigment and oil when making your own paint. Paints often need the addition of rheological additives to prevent the settling of pigments during long periods of storage and to impart certain behavioral characteristics, such as to prevent slumping. Wilson's Medium changes the viscosity of paint by thickening it and imparts rheological properties, such as shear thinning (thixotropy).

Use to 'Oil Out' or as a Painting Couch.