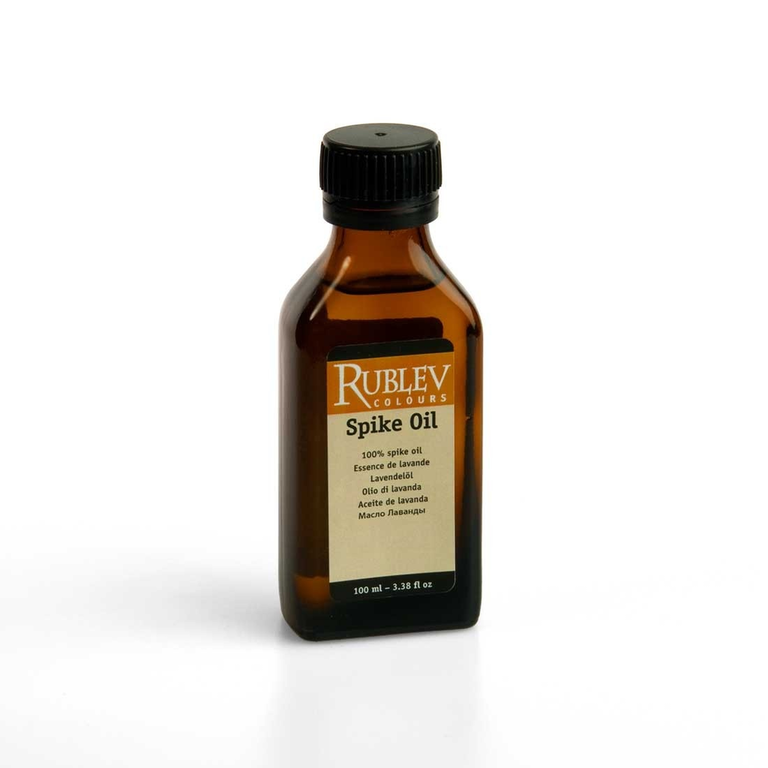 C$41.40
Rublev
4 In stock
Article code P-7742
Rublev Spike Oil is a natural alternative to turpentine. Is used as a solvent for oil paints and tempera emulsions and to prepare natural varnishes.
Share this product:

Spike oil is a natural, low-toxic substitute for turpentine. It can be used as a solvent for oil painting and in egg-oil emulsion tempera recipes. It was used historically in oil painting as early as the fifteenth century. It is believed that spike oil improves the handling of oil-based paints, because it promotes oxidation instead of simply evaporating like most solvents. However, this has not been verified by scientific testing. A small amount goes a long way and it has a pleasant smell unlike other solvents. It evaporates slower than turpentine, mineral spirits (white spirits) and odorless mineral spirits (OMS).

Spike oil can be used to thin oil paint like other common solvents, such as turpentine. It is also an effective solvent for natural resins, such as dammar, mastic, sandarac, gum elemi and copal in conjunction with turpentine.

Charles Eastlake cited authors historical use of spike oil in Materials for a History of Oil Painting. These writers referred to the propensity of blue pigments, specifically azurite and smalt, to sink into the paint causing an excessive accumulation of oil to the surface. The large particles of these pigments are heavy and sink while the oil paint dried, giving a dull and greenish appearance to the color. The addition of spike oil reduced the amount of oil binder and encouraged faster drying to prevent the blue pigment from sinking in, which is the cause of fading and/or changing to green.

Most people don’t realize there are a variety of different lavender essential oils. One of the lesser known materials is Lavandin grosso, which is a hybrid created from true lavender (Lavendulan augustifolia) and spike lavender (Lavendulan latifolia). True lavender typically grows higher in the mountains while spike lavender grows down lower. Where the two varieties tend to meet, they eventually cross pollinate and Lavandin came into being. In general, it is a larger plant than true lavender and yields a higher production of oil. Lavandin grosso is the source of our spike oil because of its lower cost. It has a stronger scent with a slightly different note to it and is more economical than the other lavender choices.

Our spike oil is imported from France where it is extracted from the flowering tops of cultivated Lavandin (Lavandula x. intermedia Grosso) and steam distilled to high purity. The essential oil is completely natural with nothing added.

Both lavender oil and lavandin oil are considered to be non-toxic and have GRAS status. Considering the high usage of lavender oil on the skin in aromatherapy, the reported incidence of skin reactions is low.

A report commissioned by Art Tree LLC a supplier of spike lavender oil determined the following: "Evidential data are supportive that Spike Lavender Oil would not cause a chronic health effect with acute or prolonged dermal or inhalation exposure. The potential for idiosyncratic allergenicity may exist and should be forewarned, but this effect would be readily identified and reversible. It is not proposed as a label caution. Adverse effects during pregnancy are unknown but assumed minimal given the history of product use. It is not proposed as a label caution." See the full report.

A word of caution: Spike oil naturally contains several types of substances, such as linalool (CAS No. 78-70-6), linalyl acetate (CAS No. 115-95-7), camphor (CAS No. 21368-68-3), 1,8-cineole (eucalyptol, CAS No. 470-82-6)  and limonene (CAS No. 5989-27-5), that in sufficient amounts can cause acute toxicological reactions. A safety data sheet for Lavandin Grosso is available here. No studies as far as we know have been performed on the effects of inhaling spike oil and OSHA has not established permissible levels in the workplace. What this means is that the effects of inhaling spike oil are unknown, so artists should take precautions and use this product with adequate ventilation and/or protective gear.

Note: In the opinion of Natural Pigments, users of spike oil should use caution and avoid personal exposure to the vapors by wearing a half-mask respirator with an organic vapor cartridge in a well-ventilated studio.